World War I had been raging for nearly three years before the US entered the war declaring against Germany on 6 April 1917. Already, WWI had seen many new elements on the battlefield. Powered flight had only occurred ten years earlier, but different types of airplanes had been built with unique purposes. Metal tanks made their first battlefield appearances as did the first aircraft carriers and submarines played a strategic role in Naval warfare. The US did not enter this war with technologies that were ahead of their allied or enemy powers but rather provided men and arms.

General John J. Pershing commanded the American Expeditionary Force or as it was known the AEF. Before the Americans could reinforce the British and French lines, the Germans began an offensive in the Spring of 1918, attempting to split the Allies. The Germans got within long artillery range of Paris but problems of re-supply and reinforcement halted the advance and by August the British, French and Americans were on the offensive to be known as the Hundred Day Offensive that would bring about the end of the war.

WWI was defined by trench warfare but new weapons and tactics were deciding factors to the conflict. Machine guns such as the British Vickers and the Lewis Gun along with the Browning Automatic Rifle (BAR) became integral to the fighting forces. Tanks and smaller company tactics began to replace large company charges from the trenches across 'no man's land' and created tactical advantages for the allies. The Germans introduced a flamethrower to the battle but at the time it had limited effect.

Germany's use of the submarine (U-Boat) led to the development hydrophones also known as sonar equipment for detection and then depth charges to attack the submerged sub.

Balloons were used for observation and directed artillery as well as provided visual reconnaissance of the battlefield. They were protected by aircraft and anti-aircraft weapons.

Aircraft was initially used for recon and ground attack by the dropping of grenades. Some aircraft were developed as aerial artillery platforms. To combat this fighter aircraft were created and the dog fight was born. Advancements on the aircraft included single and dual machine guns then air to air rockets and cannon. Then larger planes were created that became strategic bombers. War in the air added a whole new dimension to warfare and one of the most colorful commanders of the AEF was Brigadier General Billy Mitchell who was an early proponent of the role of air power.

World War I mobilized over 100 million people; over 15 million combatants and civilians were killed in what would become known as the War to End All Wars. 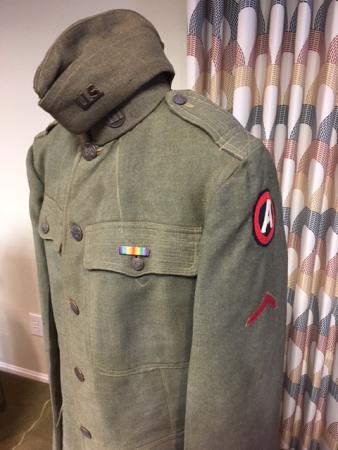