1. You are hereby designated as Supreme Allied Commander of the forces placed under your orders for operations for liberation of Europe from Germans. Your title will be Supreme Commander Allied Expeditionary Force.

2. Task. You will enter the continent of Europe and, in conjunction with the other United Nations, undertake operations aimed at the heart of Germany and the destruction of her armed forces. The date for entering the Continent is the month of May, 1944. After adequate Channel ports have been secured, exploitation will be directed towards securing an area that will facilitate both ground and air operations against the enemy.

3. Notwithstanding the target date above you will be prepared at any time to take immediate advantage of favorable circumstances, such as withdrawal by the enemy on your front, to effect a reentry into the Continent with such forces as you have available at the time; a general plan for this operation when approved will be furnished for your assistance.

4. Command. You are responsible to the Combined Chiefs of Staff and will exercise command generally in accordance with the diagram at Appendix [reproduced on opposite page]. Direct communication with the United States and British Chiefs of Staff is authorized in the interest of facilitating your operations and for arranging necessary logistic support.

5. Logistics. In the United Kingdom the responsibility for logistics organization, concentration, movement, and supply of forces to meet the requirements of your plan will rest with British Service Ministries so far as British Forces are concerned. So far as United States Forces are concerned, this responsibility will rest with the United States War and Navy Departments. You will be responsible for the coordination of logistical arrangements on the continent. You will also be responsible for coordinating the requirements of British and United States forces under your command.

6. Coordination of operations of other Forces and Agencies. In preparation for your assault on enemy occupied Europe, Sea and Air Forces, agencies of sabotage, subversion, and propaganda, acting under a variety of authorities, are now in action. You may recommend any variation in these activities which may seem to you desirable.

7. Relationship to United Nations Forces in other areas. Responsibility will rest with the Combined Chiefs of Staff for supplying information relating to operations of the Forces of the U.S.S.R. for your guidance in timing your operations. It is understood that the Soviet Forces will launch an offensive at about the same time as OVERLORD with the object of preventing the German forces from transferring from the Eastern to the Western front. The Allied Commander in Chief, Mediterranean Theater, will conduct operations designed to assist your operation, including the launching of an attack against the south of France at about the same time as OVERLORD. The scope and timing of his operations will be decided by the Combined Chiefs of Staff. You will establish contact with him and submit to the Combined Chiefs of Staff your views and recommendations regarding operations from the Mediterranean in support of your attack from the United Kingdom. The Combined Chiefs of Staff will place under your command the forces operating in Southern France as soon as you are in a position to assume such command. You will submit timely recommendations compatible with this regard.

8. Relationship with Allied Governments-the re-establishment of Civil Governments and Liberated Allied Territories and the administration of enemy territories. Further instructions will be issued to you on these subjects at a later date. 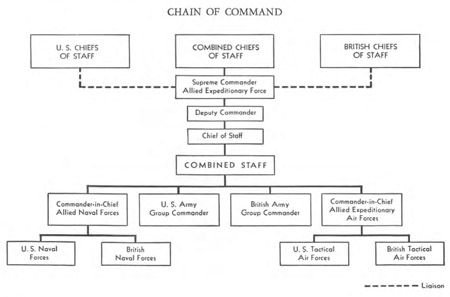