With the possible exception of the titanic clash at El Alamein, no tank engagement in World War II will be longer remembered than the dashing armored coup which first put the American Army across the Rhine at Remagen bridge.

All Allied commanders—indeed, the world—applauded this bold action which was one of the major developments leading to the collapse of the German Army.

Striking with lightning speed, scorning all risks, the 9th Armored moved so swiftly that it had established a bridgehead before the Nazis could demolish the bridge or prepare defenses across the river.

Military authorities have estimated that the feat of the 9th Armored saved a minimum of 5,000 American dead and 10,000 wounded.

The 9th Armored, which was activated in 1942, was late in getting overseas. It crossed to England in August of 1944 and did not reach Normandy until a month later. But once on fighting soil it wasted no time. In six days after hitting France the 9th Armored was in Luxembourg near the German frontier.

Looked upon as a “Little Brother” by the bigger, older, and more experienced armored divisions such as the 1st, 2d and 3d Armored Divisions the 9th Armored proved it had what it takes when Rundstedt launched his mighty winter counteroffensive.

When the Nazis struck along the VIII Corps front the “Little Brother” 9th Armored, with no real combat experience, was the most powerful unit present to oppose the onslaught.

In its first real fight the Division’s three combat commands were forced to fight on separate fronts. Command B made a six-day stand at St.Vith against superior strength. Command A fought ten days near Echtemach, then, after an all night march without rest, launched its part in the operation that resulted in the breaking of the siege of Bastogne.

The third 9th combat command received a unit citation for its contribution to the epic of Bastogne. It stood up against the German juggernaut and delayed it for 36 hours, thus giving the 101st Airborne time to dig in for the defense of the city.

Proved in battle now, the 9th Armored was sent into the offensive between the Roer and Rhine Rivers. It couldn’t be stopped. In seven smashing, driving days it rolled from river to river.

And then it electrified the world by its action at Remagen bridge.

After its crossing of the Rhine the 9th Armored raced to Limburg, brooking no opposition, and there released thousands of Allied prisoners of war.

Then the 9th turned east, serving as the spearhead of the First Army’s thrust toward the Russian lines. In full cry now, the Division, no longer a “Little Brother,” encircled Leipzig, paving the way for the fall of that key city.

The 9th Armored’s final assignment was in the Sudetenland.

The 9th Armored Division was a little late getting into action, but once turned loose it never put on the brakes. It was in high all the time.

There are 18 soldiers of the 9th Armored Division World War II still listed as missing in action. 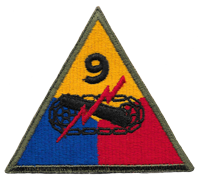