Six months before V-E Day, it looked very much to the men of the “Trident” Division as if their first war action would be against the Japanese. At that time the Division, which had been activated in February 1943, was stationed in California, with its training all completed and its men ready for battle. But in the Army plans can change quickly, even plans involving the 14,000 men and hundreds of vehicles of a division. Just two years after its activation, in February 1945, the 97th sailed for the European Theater of Operations.

In the complicated design of the 97th’s shoulder patch, the three prongs of the trident represent the states from which the personnel of the outfit were originally drawn—Maine, Vermont, and New Hampshire. Neptune’s trident was selected as an ap-propriate symbol since Maine and New Hampshire touch the Atlantic Ocean. The blue of the shield stands for the freshwater lakes of New England, the white of the border for the snow-covered mountains of the region.

The 97th landed in France at Le Havre, and was first as-signed to the Fifteenth Army. Held in reserve for several weeks, the Division then marched from France to Belgium and on into Germany, where it was assigned to the First Army and thrown into action near Düsseldorf during operations to liquidate the Germans trapped in the Ruhr pocket. After only a few days in that area, the Division was moved down along the Rhine to Bonn, at the southern end of the pocket. On April 3, the 97th crossed the Rhine, and then went back into action along the Sieg River, capturing Siegburg and several other German towns. Patrols of the 97th frequently sneaked across the Sieg during this fighting in canvas boats. Then the Division began to move back toward Düsseldorf again, to close the pocket from the south.

During the final mopping-up operations in the pocket, the 97th took thousands of prisoners. Then it was transferred to the Third Army, was shifted to General Patton s front, and was committed to action again near the town of Hof. The 97th re-mained in battle for five weeks, moving up with the Third Army into Czechoslovakia.

At a point near the Czechoslovakian city of Luditz, patrols from the Division met up with elements of the Russian Army. After V-E Day, the Division was moved back into Germany, and then prepared to sail back to the United States for redeployment to the Pacific. And in the fall, finally, the Division that had expected to begin its travels in Jap-held territory found itself in Japan, as one of the two Divisions—the 86th was the other—that actually got redeployed from Europe.

There are 3 soldiers of the 97th Infantry Division World War II still listed as missing in action. 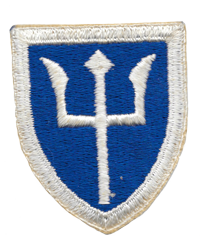