“Give us Der Führer in Berlin—and make it collect!”

That was the command issued to startled German telephone operators by men of the 95th (“Victory”) Division following a lightning drive to the Rhine that caught the inhabitants of Rheinhausen, and the Nazi garrison defending it, flat-footed.

They didn’t get Hitler on the phone, although the lines to Berlin were still intact, so quickly did the Victorvmen strike, but it is a cinch that Adolf had heard of the 95th Division. It was this Division, called the “Bravest of the Brave,” which planned and executed one of the most daring maneuvers of the war during the capture of the city of Metz.

Metz was protected by a ring of bristling forts, including Fort Amanvillers, the three Canrobert Forts, and Fort de Feve, east of which spread the intensive Lorraine fortifications. To try to take the city by head-on assault would have been suicide, so the 95th pulled the “hidden ball” trick on the Nazis. It set up a phony front composed of three rifle platoons, one antitank platoon, cooks, clerks, and other regimental headquarters and service company personnel. The small force, using loudspeakers and other means of deception, fooled the Germans into thinking than an entire regiment was fronting the forts. The fake enabled the 378th Regiment to sweep around the northern tip of the fortifications and attack from the rear. Within three hours Feve was captured. Two hours later the 378th took Some- court. Then Saulny, Vignuelles, Plesnois, and Norroy-le- Veneur tumbled. On the third day of the operation the three Canrobert forts were assaulted and captured. Meanwhile, the 379th Regiment was battering away at Fort Jeanne d’Arc, strong guardian of the western approach to Metz. A bloody battle fol-lowed as the outfit smashed through the German main line of resistance and ran wild through seven towns to reach Metz.

The 95th headed for the Saar late in November and once again pulled a trick that prompted a commendation from the present Secretary of War, Robert P. Patterson. The Victorymen crossed the Saar without the loss of a single man. They crossed in rubber boats. Not a shot was fired. Once across the river, the Doughs of the 95th turned south toward the approach to the main highway bridge over the Saar. It was the only bridge over the Saar in that area, and the 95th needed it intact.

The men took it intact, by once again striking with lightning speed. A radio operator in a German armored car, frantically pounding out a call for help, was bayoneted. A second Kraut, sprinting for the demolition switch on the bridge, was shot dead, five feet short of his goal, by a battalion commander, whose men then hit the bridge and began cutting demolition wires only seven minutes before Nazi engineers were scheduled to blow up the bridge. The advance elements of the 95th found 6,000 pounds of explosives under the bridge.

Guns from every pillbox within range cut loose as the Ger-mans realized what was happening to their prize bridge. But the 95th secured both ends of the crossing, and although it con-tinued to be a hot spot for more than a month, every Doughboy in the Division crossed it.

The battle for the Saarlautem was one of the most vicious of the war. The city’s three suburbs across the bridge were integral parts of the Siegfried Line. Massive pillboxes and bunkers were sandwiched between houses, and others cleverly camouflaged as commercial buildings. A battalion objective for an entire day might be a single block, or a part of a block. It was house-to-house, bunker-to-bunker fighting as the men of the 95th encountered mines and booby traps, 88mm, guns firing point-blank. There was a savage hand-to-hand encounter in a ballroom. "There was plenty of dancin there," one of the 95th soldiers said, "but it wasn't a slow fox-trot. It was a dance of death."

There are 36 soldiers of the 95th Infantry Division World War II still listed as missing in action. 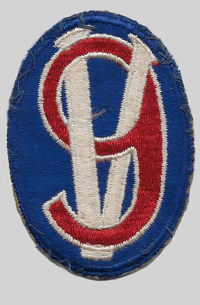