There were dozens of allied divisions in the European Theater of Operations, but for nearly four months one of them—the 94th Infantry—fought a strange war on a 450-mile front all by itself.

When most of the Germans retreated back across France toward their own borders, after the breakthrough out of Nor-mandy, some of them sought refuge in the ports of the west coast of France. Those at Brest gave up after six weeks of siege, but those at St. Nazaire and Lorient remained a menace. The 94th got the job of keeping them bottled up.

For 111 days the division kept a watchful eye on the 60,000 Germans in the two ports, with frequent battles on the perime-ters of the enemy positions. Perhaps one of the oddest roles in the war was that played by the division’s cavalry reconnaissance troop, which secretly established itself on an Atlantic island between the two ports, to observe German sea traffic back and forth.

Rarely before had a division operated on so wide a front and with such thinly held lines. To reinforce its own ranks, the 94th trained and equipped 29 battalions of French troops, who later, with the 66th Division, took over many of the division’s responsibilities.

The 94th had headed for its “forgotten” war in Brittany right upon landing in Normandy on—coincidentally—D-plus-94, after a stormy crossing of the Channel during which some units were at sea as long as 30 days. For a while the men of the black and gray numerals thought they’d never get to see the main part of the war at all.

But they soon had those illusions shattered. The Doughboys of the Division—first of all American divisions to have its three principal units designated “Expert Infantry Regiments”— rushed northward from Brittany on New Year’s Day, 1945, to help fill the gaps on the Third Army front caused by the shifting of General Patton’s forces to help stem Rundstedt’s counter-offensive.

Then the 94th ran into the Siegfried Switch Line, a series of strong buffer defenses on the Moselle and east of the Saar River. For the next five weeks the Division fought there, first merely holding ground and then, as the German bulge was lopped off, attacking through the Switch Line with the 10th Armored Division. By erasing this line, the 94th cleared the Saar-Moselle triangle and paved the way for the capture of the key city of Trier.

Then the 94th drove forward and forced a bridgehead across the Saar, at times paddling furiously against a 7-mile-an-hour current which gave the German defenders additional time to hurl steel at the oncoming Doughs. By early in March the Division had consolidated its gains across the Saar and was ready to strike again.

On March 16 the 94th was given the job of spearheading the Third and Seventh Armies’ drive to the Rhine. Eight days later, the Division was at the river. It had taken the prize industrial city of Ludwigshafen, had fought for 195 consecutive days, and had captured more than 17,000 prisoners. The “forgotten” Division had made itself well remembered in a war it no longer had to worry about being left out of.

The 94th would arrive in the European Theater of Operations (ETO) on 11 August 1944 under the command of Major General Harry J. Malony. They would set foot on the European continent on 5 September, D-Day plus 91 (D+91)  and in relief of the 6th Armored engaged the German garrisons located in the ports of Saint Nazaire and Lorient on the Brittany penninsula.

In January of 1945 the 94th moved east to relieve the 90th Division in the Saar-Moselle Triange. From an initial position opposite the Siegfried Switch Line they began offensive operations on the 14th of January and took the towns of Tettingen and Butzdorf followed by Nenning-Berg-Wies before being blocked at Orscholz. February would bring victories at Campholz Woods, Sinz and Munzingen Ridge. By the end of the month the division working with the 10th Armored Division had secured the area from Orscholz-Saarburg to the junction of the Saar and Moselle Rivers.  By March the division crossed the Saar via a bridgehead at Serrig and established allied lines through Zerf, Lampaden, and  Ollmuth and were moving toward the Rhine.  They reached the Rhine on the 21st and began a battle for Ludwigshafen.

April had the 94th located on the west side of the Ruhr pocket and by the middle of the month were operating the local military government in Krefeld.   They were located in Dusseldorf when the V-E Day arrived. The 94th Infantry Division had been activated on 15 September 1942 at Fort Custer near Kalamazoo, Michigan. The core composition of the Division was comprised of the 301st, 302nd and 376th Infantry Regiments. Major General Malony was their only commanding officer during their war time service stepping down following the German surrender.  The division returned to the US in 1946.

There are 13 soldiers of the 94th Infantry Division World War II still listed as missing in action. 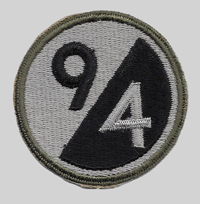