In World War II towns have been liberated by men in tanks, by paratroopers dropping from the sky, by scout car patrols, and by jeep, but it remained for the Doughboys of the 88th Infantry Division to do the job by bicycle.

Shortly before the cessation of hostilities in Italy, the 2nd Battalion of the 350th Infantry requisitioned bikes from the friendly Italians and, in a “mad” dash from Nogara to San Martino, drove the Nazi troops from the last named city and liberated its citizens.

The 88th, whose Doughs wear a blue cloverleaf formed by two interlocking 8s on their shoulders, was the first all-Selective-Service infantry division committed to combat on any front in this war. The Cloverleaf boys got their first taste of action— and it was a minor one compared to the battles that were to come—when the Division took up positions along the Garigliano River in Italy in March 1944.

This was purely a defensive action, but a week later the Division was given the go-ahead signal and launched its assault on the Gustav Line. Two days later, despite the most savage opposition, the vaunted line was breached, and the Cloverleafs were on the road to Rome, close behind the fleeing Nazis.

The 88th marched into the Eternal City 24 hours after it had become the first liberated capital of World War II. A few weeks rest in Rome and the 88th was on the move again, taking over the missions of the 1st Armored Division, which it had relieved.

This time its goal was the celebrated Gothic Line, and the 88th drove toward it with a relentlessness that brooked no opposition.

Now, began the Division s most savage battle. It entered the Gothic Line action in September, and during the ensuing months suffered its heaviest casualties. It battled unfavorable terrain, miserable weather, and a fanatical enemy. But it kept punching, punching, to capture Mt. La Fine, Belvedere, Gesso, Mt. Acuto, Mt. Capello, Castel del Rio, Mt. Battaglia, and Mt. Grande. Mt. Grande was the nearest point to the Po Valley reached by any Fifth Army outfit until the spring of the following year. During this drive the 88th was exposed to one of the most intense artillery poundings of the entire Italian campaign.

The 88th was ordered to hold up after the Mt. Grande drive, and spent the winter in alternate rest periods and tours in the line. Observing its first combat anniversary on March 5, 1945, the Division had chalked up an offensive advance of 325 miles, captured more than 5,500 prisoners, and destroyed six German divisions and badly mauled half a dozen others.

In April 1945, the 88th went to work again, this time in the North Apennines Po Valley. It took Monterumici, and by the end of the month one of its units had entered Verona, key communication center of the Valley. Not many weeks later it swept into Vicenza, and then on to Nogara, from which it made its bicycle assault on San Martino.

When the war ended in Italy, units of the Division were or-dered to make contact with the Seventh Army. This was accomplished a few miles south of the Brenner Pass in May. 1945.

During the Po Valley drive the 88th bagged more than 30,000 prisoners in 16 action-packed days.

There are 80 soldiers of the 88th Infantry Division World War II still listed as missing in action. 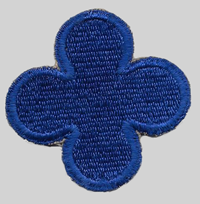