There was a Colonel at the fortress of St.Malo—the one thev called the “Mad Colonel”—who didn’t want to surrender, and to the east there were 20,000 armed German soldiers of every rank who didn’t want to surrender, either. That is, they didn’t want to until the 83d Division came along. Then they had to. Colonel Von Aulock was the defiant commander who, in the fall of 1944, decided to hold out, and it looked as if he might for an indefinite time until the “Thunderbolt” Division laid siege to his stronghold and caused him to think better of his initial decision. A few weeks later, when the Division captured 20,000 Germans at one swoop in France, while covering the right flank of the Third Army in the Loire River Valley, the Thunderbolts set a record for the number of prisoners taken by the Allies up to that time on the European continent.

The 83d hoped to get into the battle of Normandy right at the start, but rough weather kept it out in the English Channel for a week, and it finally hit the beaches on D-plus-12. Plunging into the hedgerows, it moved inland to the swamps of Carentan, to relieve the 101st Airborne Division which had jumped just before H-hour on D-day. On the Fourth of July, the 83d launched its first big offensive. With the 9th and 90th Infantry Divisions, it broke through to the St.Lô-Coutances highway, moved early in August by truck to Avranches, and then headed west to take care of the stubborn residents of St.Malo, which fell on August 17.

Operating in the Loire Valley from August 22 to September 20 the 83d covered a 200-mile line from St. Nazaire to Auxerre, made a junction with the Seventh Army, and delivered its celebrated haul of 20,000 Supermen to the Allies. Late in September the division, as part of the Third Army, swung northeastward for the drive through France and Luxembourg. In Luxembourg, relieving the 5th Armored and 28th Infantry Division, the 83d made a lasting impression on the civilians with its lively dance band. It didn’t have much time, however, for rest or frivolity. Early in December it was moved into the Hurtgen Forest to relieve the 4th Infantry Division, and from there it fought its way to the western bank of the Roer, near Duren. And then came the Ardennes counteroffensive.

Ordered to Rochefort, the 83d found itself fighting in waisthigh snow. Morphine syrettes froze, automatic weapons wouldn’t function, and the soldiers of the Division suffered from the bitter cold. They stuck to their guns—sometimes literally— and helped turn back the enemy assault. A month later they were assigned to the Ninth Army and, on March 1, approached the Rhine and took Neuss, just outside of Düsseldorf. They were credited with being the first American division to reach the lower Rhine, and, after patrols had made several crossings of the river to probe the enemy defenses on the other side, the whole Division swept across on March 30. Given the job of cieaning up pockets bypassed by the 2d Armored, the Thunderbolts accomplished that mission and then did some bypassing of their own, slicing through the Ruhr Valley and driving for the transportation center of Hamm.

Marching virtually unopposed into the blasted Hamm railyards, the 83d seized so many abandoned vehicles that it was able completely to motorize itself, and it raced east to the province of Brunswick, moving so fast with its borrowed transportation that at one point it outstripped the speedy 2d Armored. Swinging southeast, the 83d pushed 215 miles from the Rhine to the Elbe, which it reached at Barby, just south of the Znd Armored’s bridgehead. On its way, the 83d in 14 days captured 24,000 Germans and liberated 75,000 Allied prisoners.

Most of the men of the 83d, when it fought in Italy and France in 1918 had originally come from Ohio, and the Division’s shoulder patch is a monogram of the letters of that state. In this war the Division’s personnel has been drawn from all over, but the men still like the old patch, and they like to spell out the words for which the letters now stand—"One Hot Infantry Outfit."

There are 28 soldiers of the 83rd Infantry Division World War II still listed as missing in action. 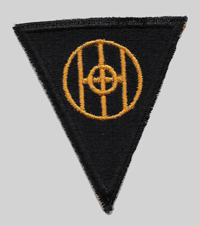