Wildcat Creek, a tiny stream that flows through Fort Jackson, South Carolina, inspired the first shoulder patch to be worn by any division in the United States Army.

The 81st Infantry Division took its nickname from the creek, and, when it sailed for France in 1918, its men wore a cloth patch on their left shoulders featuring a silhouette of a wildcat on an olive drab circle.

The patch caused much comment by men of other divisions, and they questioned the right of the Doughboys of the 81st thus to distinguish themselves. The matter was finally brought to the attention of General John J. Pershing, and “Black Jack,” after an investigation, ruled that the Wildcat Division could keep its patch, and suggested that all other units adopt distinctive insignia.

The Wildcats fought with honor against the Germans, and a generation later the fighting men of the new 81st Division were clawing at the Japanese in the Pacific.

The World War II Wildcats began their drive against the Japanese in September of 1944. After training in Oahu and the Solomon Islands, the Wildcats sailed for their first combat mission—the capture of Angaur Island in the Palaus. They stormed ashore on September 17, and the conquest of Angaur was speedily accomplished as troops drove through Japanese defenses to the western shore, cutting the island in two and driving the enemy into isolated pockets of resistance. Angaur wad declared secure on September 20, and mopping-up opérations began on the remnants of the Japanese garrison which had fortified itself for a death stand on the high ground in the northwesl corner of the island.

After 35 consecutive days of steady fighting, the last Japanese cave was entered, and every Jap on the island was a dead Jap.

Elements of the 81st Division were with the 1st Marine Division in the assault on Peleliu Island, and fought alongside the Leathernecks in the bloody and costly battle for this rockv Pacific pile. On Peleliu, the Japs literally had to be rooted from their deep caves on the precipitous slopes of the jagged cliffs. The Wildcats scaled the slopes to get at the Nips with bayonets, grenades, and dynamite charges, all the while undergoing merciless machine-gun and mortar fire.

The Wildcats mopped up Ngesebus, Kongaru, and Garakavo Islands. They made the first landing on Ulithi, later the Navy's huge Pacific fleet base. In all these operations the Wildcats killed 5,676 Japanese and took 344 Japs and Koreans prisoner.

In the summer of 1945, the 81st moved to the central Philippines. And later on up into Japan, the end of a long road.

There are 22 soldiers of the 81st Infantry Division World War II still listed as missing in action. 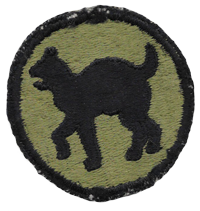