Anybody who couldn’t understand the need for gas rationing late in 1944 and 1945 might stop and reflect for a minute on the combat career of the 7th Armored Division. During nine months of action, from August to May, the “Lucky 7th”—just one of 15 armored divisions that saw action in the European Theater of Operations—used up 3,127,151 gallons of fuel, well over 10,000 gallons a day. And at that it ran out of gas.

It was at Verdun that the 7th Armored had to halt and wait for its fuel to catch up with it. Landing in Normandy on August 10, it set out in the direction of Chartres and, before it stopped, had covered 620 miles in its first 21 days in Europe, passing through Reims, Melun and Château-Thierry on the way.

The Lucky 7th really got around. It traveled nearly 2,000 miles, and served under four armies and eight corps. After being refueled at Verdun, it headed for Metz, and battered away at the outlying fortifications of that stronghold along with Doughboys of the 5th Infantry Division. Then the 7th Armored was transferred up to Holland, under the British Second Army.

On December 16, the 7th Armored Division was at St.Vith, when the Germans launched their counteroffensive in the Ar-dennes. For the next month, it fought furiously in the Battle of the Bulge, first losing ground and then grimly battling its way back into its former positions. After the Germans were thrown back, the Division got a brief rest, and then, late in March, came back to the front and broke out into Germany after crossing the Rhine at Remagen, where the 9th Armored had seized the bridge. Roaming unchecked in enemy territory, the Lucky 7th was ultimately assigned to reducing the Ruhr pocket. The Germans tried to make the job as uncomfortable as possible, even turning flak guns primarily used for antiaircraft against the advancing 7th Armored. But the Division was not fazed by this, and had the last say when, on April 16, it forced an entire panzer corps to surrender to it.

From the Ruhr, the 7th Armored journeyed north again, re-joining the British north of the Elbe and pointing its tanks toward the Baltic Sea. It had made a specialty of collecting German cities—Giessen, Hemer, Menden, Grevesmuhlen and Dassow were among the ones it had taken—but now it began to specialize in collecting Germans. It began picking up so many prisoners that merely controlling the flow of its prisoner traffic became a problem, and at one time it had 51,000 in its camps. By the war’s end, the 7th Armored Division’s total bag of prisoners was computed at 113,042—not a bad return for the expenditure of fuel.

There are 82 soldiers of the 7th Armored Division World War II still listed as missing in action. 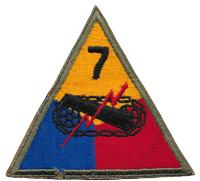