The symbol of the Fighting French was the Cross of Lorraine.

And in the summer of 1944 many a Frenchman was freed from the bondage of Naziism by the Americans who wear that cross—the 79th Infantry Division.

There were cheers, and flowers, and wine for all the liberating GIs of all our Divisions in Europe, but no outfit was ever more warmly greeted by a whole country than was the 79th by the grateful citizens of Cherbourg, La Haye-du-Puits, Lessay, Le Mans, Avranches, Reims, Charmes, Lunéville, and a dozen other cities on the division’s long path of liberation.

The Cross of Lorraine was first carried ashore at Utah Beach on American shoulders on D-plus-6. Four months later, a German division, in an order to its subordinate units, warned them to watch out for the 79th—“one of the best attack divisions in the U. S. Army.”

That had been true in World War I, when the 79th stormed Montfaucon and, in 30 hours of hellish fighting, had started the Kaiser’s armies on their way to defeat.

And it became equally evident in World War II as soon as the 79th was given its first important mission: a major share in the assault on Cherbourg. While its 314th Infantry Regiment scaled the tough sides of Fort du Roule, on the outskirts of the port, patrols of the 313th sneaked into the city and later the rest of the regiment followed up, smashing through Cherbourg Street by street and house by house, and winning for the Division the proud right to claim—First in Cherbourg.

Cherbourg surrendered on July 26 and the next day the 79th, having tasted only briefly the fruits of liberation, was on its wav to La Haye-du-Puits, nerve center of the German supply system for the enemy forces in northern France. Through hedgerows honeycombed with artillery and automatic weapons, and despite dug-in enemy tanks raking them at pointblank range, the Cross of Lorraine men swarmed into the town and took it on July 8. They headed south through Avranches and Fougères, and southeast to Le Mans, where, after bridging the Sarthe Rivér, they helped to close the Falaise pocket.

Swinging east, the 79th raced ahead of all other forces toward the Seine, reaching it at the ruined city of Mantes-Gassicourt. No other American outfit reached the Seine as soon, and the 79th, by getting there and holding the rubble of Mantes-Gassicourt, greatly facilitated the liberation of Paris. The Germans were stunned by this swift dash of the Cross of Lorraine; they thought at first that the 79th had suddenly become airborne and had been dropped near the Seine. Recovering from their surprise they hit the Division with Nebelwerfers and a revived Luftwaffe, but it didn’t get them anywhere.

Shifted to the First Army front in Belgium, the 79th set off in high gear and in 72 hours had crossed the Somme and was ready to fight in Belgium, 180 miles away, after making what a corps commander called “one of the fastest opposed advances of comparable distance by an infantry division in warfare.” Later the Cross of Lorraine was shifted far to the south, on the Seventh Army flank, and fought at the Meurthe River, in the Forêt de Parroy, in the city of Lunéville, and across the Rhine deep into Germany.

After the 79th had driven the Germans out of their positions in the Saveme Gap and Sarrebourg, late in 1944, General Patch told the division, “You have achieved a significant victory. I have full confidence in your ability to continue your relentless pursuit until the final victory.”

That was just what the 79th did.

There are 68 soldiers of the 79th Infantry Division World War II still listed as missing in action. 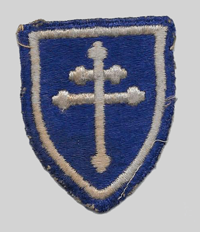