In the Army, a holiday can’t often be celebrated in the orthodox way, but sometimes it’s a pretty special day anyhow. For the “Liberty Bell” Division, for instance, Thanksgiving in 1944 will always have great significance. It was on that day that the 76th. after 29 months’ training in the U.S., finally pushed off for Europe.

The 76th was the first Allied division to enter Germany via Luxembourg. In February 1945, the men who sometimes, jokingly referring to the design of their shoulder patch, call themselves the “Bell Telephone” outfit, went into action. (Actually, the three-pronged “label” on the 76th’s insignia is a replica of a medieval design used to indicate the eldest son of a family.) Near Bitburg, Germany, on the Third Army front, they cleared the east bank of the Priim River, went south to take Irrel. Wolsfeld, and Alsdorf, and then drove a salient across the highway linking Bitburg with Trier and contributing greatly to Trier’s ultimate capture.

Joining up with the 10th Armored Division, the Liberty Bells made two crossings of the Moselle River, pushing to 17 miles northwest of Trier, and adding such towns as Butzweiler, Binsfeld, Herscherforst, and Arrenrath to their bag. Near Kamburg, the 76th reached the Saale River, and went across it to clear the city of Zeitz ( population 30,000), 20 miles southwest of Leipzig. Then came a mission of mercy—the rescue of Allied prisoners penned in at the Kônigstein Fortress. As the winter drew on, lie Division found itself mixed up in some heavy fighting. In one sector, 3,000 meters square, the 76th cleaned out a total of 131 enemy pillboxes.

Toward the end of the war the Liberty Bells fought in the liera area and, just before V-E Day, established a bridgehead i cross the Mulde River. By that time, the 76th had taken 33,000 prisoners.

When American forces began to pull back out of occupied territory assigned to the Russians, the 76th was the first division to make such a withdrawal, retiring from Chemnitz to the west bank of the Mulde and taking up positions south and west of Zwichau. By July, the Division was on guard duty at Hoff.

There are 9 soldiers of the 76th Infantry Division World War II still listed as missing in action. 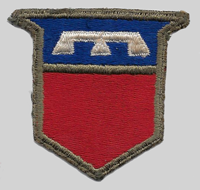