The Germans couldn’t have been blamed if they had thought the American Army had at least two 75th Divisions.

The 75th—there was only one—bounded back and forth so much along the European battlefront from January to May 1945, that observing its progress was a good deal like watching a lively tennis match.

Reaching the European Theater in November 1944, nineteen months after its activation, the 75th began fighting on January 1 in the Battle of the Bulge, and stayed in action there for 26 cold and bitter days. Crossing the Salm River, the 75th moved into the north flank of the Ardennes salient in Belgium, cleared Salmchâteau and Bech, and helped take the important bastion of Vielsalm. The Division also was one of the American outfits that fought at St.Vith.

The 75th swept down to the Seventh Army front, in the Colmar-Breisach area. At the end of January, the Division was busily engaged in that part of Alsace, where it eliminated a pocket of resistance between Colmar and the Rhine.

By March 1 the 75th was up north again, in defensive positions on the west bank of the Maas River in Holland. On March 7th—there they go again—the Division jumped from Venlo, Holland, to Bryell, Germany. After much patrol activity east of the Rhine, the 75th crossed the river on March 24, and a week later launched its first big attack on the other side.

From then on, the much-travelled 75th fought in the Hotten-Grandmenil sector, took Witten, and conducted extensive mopping-up operations in the north corner of the Ruhr pocket, at Eckern and other points.

On V-E Day the 75th was at Lutgen, Germany, and shorty thereafter it set up occupation headquarters at Werdohl. Later moved out to operate an assembly area for other troops being :rturned to the United States.

There are 3 soldiers of the 75th Infantry Division World War II still listed as missing in action. 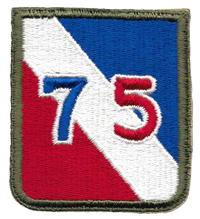