“Travel with us and meet everyone in Europe.”

That was the slogan of the 71st Infantry Division when V-E Day came around.

One of the most popular pastimes of the 71st Doughs was trying to figure out just where they had been, and under what commands they had served.

When the 71st reached France in February 1945, it was with the Seventh Army. It then was switched to the Fifteenth Army, and later served with the Third Army. It was with the XV Corps and the XXII Corps. As one GI quipped, “We just missed the K-9 Corps.”

In its time in action the 71st served alongside the 100th, 42d, 44th, 3d, 104th, 26th, and 5th Infantry Divisions, and the 10th and 12th Armored outfits. The 71st went into action in the bitter cold of March 1945, and for 15 days its mission was the destruction of German pockets west of the Rhine. When the 71sters hit the Siegfried Line, they kept right on going, breaching the famed defense wall to capture Pirmasens. When the Doughs swept through this city they liberated 8,000 slave laborers.

The 71st then drove across the Hardt Mountains and the Rhine plains, and cleaned up Nazi resistance on the west bank of the Rhine near Ludwigshafen and Speyer.

One of the most important achievements of the 71st was the cutting of the Berlin-Munich highway, main escape route from the capital of the Bavarian mountains. It was in this drive that ne 71st bagged upwards of 30 German generals.

The Division crossed the Danube in assault boats at several places east of Regensburg. It was in on the capture of Mannheim, aiding the 44th Division. This city fell when, after military officials had refused to heed the mayor’s request that the city yield to the Americans, the Yanks turned 26 battalions of artillery fire on the place.

On V-E Day the 71st was south of Linz, Austria, on the Enns River, and later it moved to Augsburg, Germany.

There are 9 soldiers of the 71st Infantry Division World War II still listed as missing in action. 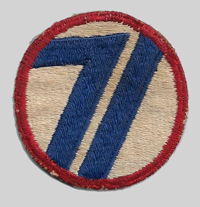