The “Battle-Axe” Division was forged in August 1943, and sharpened for nearly two years. Then, on March 7, 1945, it was unsheathed.

Sent into action on the Third Army front in Europe, the 65th relieved the 26th Division along the Saar River, near Saarlautern, in an area that ran from Orscholz to Wadgassen. Crossing the Saar, the Division swung around the flank of Saarbrucken and, late in the month, cleaned up pockets south and west of that city. Then, moving behind speeding armor of the Third Army, the 65th mopped up at Altengottern and at Langensalza, ten miles north of Gotha.

Moving to the east, the Battle-Axe outfit added Hohenfals and Strath to its bag. Near Strath, at the town of Doma, one 11-man group of 65th soldiers, hopelessly surrounded and terrifically outnumbered, won themselves a place in the Division’s history by turning the tables on the Nazis who finally captured them and, before they were through, capturing 150 Germans themselves and killing another 25.

Just before V-E Day, the 65th claimed the distinction of having made the farthest penetration into enemy territory of any Infantry unit on the Western Front—when a patrol of the Intelligence and Reconnaissance Platoon of its 259th Infantry, on May 7, crossed the Ems River at Kronstorf and proceeded on to Unterwinden and Haag, in Austria.

Up to then, the 65th had been extremely active. Moving forward with the Third Army, the Battle-Axers had plunged across the Danube at Kelheim and joined the American forces assaulting the city of Regensburg. When the garrison at Regensburg finally gave up, it surrendered to the 65th. The Division moved on then into the Bavarian Redoubt, and took Passau and Xeumarkt. On the afternoon of V-E Day, fittingly, the Battle-Axers met the Russians. Finally, the Division moved to Linz, Austria, under a separate occupation agreement.

There are 7 soldiers of the 65th Infantry Division World War II still listed as missing in action. 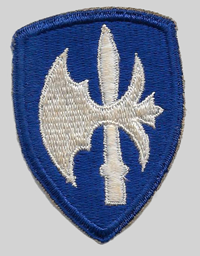