Three years before it plunged into the battle for the liberation of Europe the 5th Armored Division officially adopted the nickname, “Victory” Division. It was a wise choice, because when V-E Day came, the 5th Armored, after almost a year of bitter fighting, was the nearest American outfit to Berlin. It had fought its way from the beaches of Normandy, and the men and machines were ready for a crack at the capital of the Reich when the shattered German forces capitulated.

The Doughs of the 5th Armored will tell you that the month of fighting in the Hürtgen Forest and on the approaches to the Roer River was the most bitter they experienced. Held down by the terrain, weather and thousands of mines, the Tankers and Infantrymen fought a hacking, foot-by-foot battle. They lived in mud and rain and ice, and were constantly exposed to tre-mendous artillery concentrations. But this month of savage battle broke the German spirit. Never again did the Nazis fight with the ferocity they displayed at Hürtgen.

The “Victory” Division went into combat in August 1944. For the first time in the history of armored warfare a full armored division was to be sent driving through enemy territory in a spectacular 300-mile mission to disrupt and trap enemy forces. Fifteen days after the first 5th Armored tanks had rolled through the gap between Coutances and St.Lô, they had reached Argentan.

From here the 5th Armored turned east to cut off German units west of the Seine. Paris lay only 50 miles away, but the 5th swung north toward the junction of the Eure and Seine Rivers. In this natural pocket the Division trapped thousands of Nazis vainly attempting to cross the Seine and escape.

Paris liberated, the Victory Division started a fast drive to the Belgian border, 130 miles north. It cut through Compiègne Forest, crossed the Oise and Aisne Rivers, and then the Somme. A month later the Division was at Condé on the Belgian border.

New orders sent the outfit racing another 100 miles to the Meuse River. Speeding onward, the 5th Armored spearheaded the drive that liberated Luxembourg. On September 11, 1944, elements of the Victory Division crossed the Our River into Germany, and thus earned the distinction of being among the first Americans to fight on German soil.

In November the Victory Division, working with the 90th Infantry Division, crossed the Moselle River. Fighting hard in December during the “Bulge” period, the 5th Armored greeted 1945 by continuing to advance against the heaviest kind of opposition. At Coblenz, the 5th Armored smashed and then mopped up all enemy resistance.

By spring the 5th Armored Division had rolled to the Weser River, and in May, driving north of Brunswick, it reached the Elbe and crossed it. V-E Day found the Victory Division’s sights set on Berlin.

Activated on 1 October 1941, the division was assigned to Fort Knox, Kentucky, for training under the Armored Force. In March 1942, under the command of Major General Jack W. Heard, it was transferred to Camp Cooke, California, from August to October 1942, and the unit took part in maneuvers in the Desert Training Center Area. Brigadier General Sereno E. Brett took command in 1942 and in February 1943, Major General Lunsford E. Oliver, who trained, lead and fought with the division during the remaining years of the war, assumed command. In March 1943, from April to June 1943, the 5th Armored Division maneuvered in Tennessee under the Second Army. In July 1943, it was transferred to Pine Camp (Now Fort Drum), New York, to prepare for overseas service and in February 1944, sailed to the European Theater of Operations. The division trained at Camps Chiseldon, Ogbourne, St. George and Tidworth-Pernham Down in Wiltshire, England.

The division landed at Utah Beach on 24 July 1944, and moved into combat on 2 August, in the thick of the Normandy Campaign driving south through Coutances, Avranches, Vitré and St. Lo, and across to seize the city of Le Mans on 8 August.  Turning north, the division surrounded the Germans in Normandy by advancing, through Le Mêle-sur-Sarthe liberated on 11 August, to the edge of the city of Argentan on 12 August, 8 days before the Argentan-Falaise Gap was closed.  As part of General Patton’s Third Army, the division embarked on a 300 mile exploitation behind the German Seventh Army and the 5th pursued the enemy, wrecking their armor and inflicting high casualties all the way to the Seine River.

Turning Argentan over to the 90th Infantry Division, the 5th Armored advanced 80 miles to capture the Eure River Line at Dreux on 16 August.  Bitter fighting was encountered in clearing the Eure-Seine corridor, the second big trap in France.  In the Eure-Seine Campaign, following the plunge of the Seine, the 5th Armored Division distinguished itself, receiving a commendation from the XV Corps Commander.

The 5th passed through Paris on 30 August and it was then shifted to the First Army to spearhead V Corps drive through the Compiègne Forest, across the Oise, Aisne, and Somme Rivers, and reached the Belgian border at Condé, 2 September.  The division then turned east, advancing 100-130 miles in 8 hours, and crossed the Meuse at Charleville-Mézières, 4 September.  Racing past Sedan, it liberated Luxembourg City on the 10th and deployed along the German border.  The reconnaissance squadron of the division sent a patrol across the German border in the vicinity of Stalzenbourg on the afternoon of 11 September to be the first of the Allies to cross the enemy frontier. On 14 September, the 5th penetrated the Siegfried Line at Wallendorf, remaining until the 20th, to draw off enemy reserves from Aachen.

In October, the 5th Armored held defensive positions in the Monschau-Hofen sector.  The division entered the Hurtgen Forest area in late November and pushed the enemy back to the banks of the Roer River in very heavy fighting.  Also, the Victory Division participated in the original crossing of the Moselle River.

The men of the 5th rate the December battling in the Hurtgen Forest and on the approaches to the Ruhr River as the most bitter fighting they experienced. They lived in mud, rain and ice and were constantly exposed to tremendous artillery concentrations. This was the month of savage warfare that broke the German spirit, never again did the Nazis fight with the ferocity shown at Hurtgen. On 22 December, the 5th was withdrawn to Verviers and placed in 12th Army Group reserve by continuing to advance and crushing enemy armor in the XV Corps objectives. At Koblenz, the unit smashed and then mopped up all enemy resistance.

Crossing the Roer on 25 February 1945 the 5th, now part of the U.S. Ninth Army, spearheaded the XIII Corps drive to the Rhine, crossing the Rhine at Wesel, 30 March.  The Division reached the banks of the Elbe at Tangermunde, 12 April—45 miles from Berlin, the nearest U.S. unit to Berlin.  On 16 April, the 5th moved to Klotze to wipe out the Von Clausewitz Panzer Division and again drove to the Elbe, this time in the vicinity of Dannenberg.  The division mopped up in the Ninth Army sector until V-E-day.  Assigned to Supreme Headquarters Allied Expeditionary Force (SHAEF) after V-E Day, the division sailed for Home on October 2, 1945, and was an inactivated on October 11, 1945, at Camp Kilmer, New Jersey.

There are 46 soldiers of the 5th Armored Division World War II still listed as missing in action. 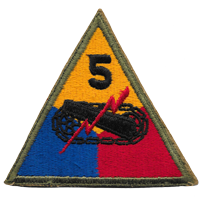