Before Pearl Harbor, the shoulder patch of the 44th Division was a familiar sight around New York. When it went into training in September 1940, the 44th was composed of National Guard units from New York and New Jersey. The blue-and-orange colors of its patch are those of the Netherlands House of Nassau, which controlled the original settlers of the Division’s home areas. After Pearl Harbor, however, the 44th left the East for extensive combat training, and remained on duty at various camps in the United States for four years until September 1944, when it embarked for the European Theater of Operations shortly after the Allied invasion of southern France.

The 44th soon became a part of the Seventh Army, which had conducted those landing operations and was pushing northward for a junction with the forces that had driven into Europe from Normandy. In October, just east of Lunéville, France, the Division went into action and took part in the Seventh Army’s drive to secure several passes in the Vosges Mountains. It hadn’t been committed to battle long before it learned a severe lesson in what war can be like at its worst.

Six days after its first taste of blood, the 44th was hit by a heavy German counterattack, and its front lines were pierced. The Division rallied and nullified this blow, and then, working with the French 2nd Armored Division, it started a slow, steady advance through Alsace-Lorraine, taking Leintrey, Avricourt, and Sarrebourg. One battalion, accompanying the French, reached the Rhine at Strasbourg. On November 25, while the two Allied divisions crept forward over snow-covered ground every inch of which was savagely defended, one battalion of the 44th won itself a citation for especially distinguished action and; in doing so, saved the whole Division and neighboring forces from rough treatment and possible annihilation.

The 2nd Battalion of the 114th Infantry Regiment, defending a 4,000-yard sector north of Schalbeck, France, that day, was suddenly struck by a picked panzer division, which had the mission of grinding through the 44th, retaking Sarrebourg, and cutting off all the Allies east of the Vosges. Although the Germans had more men and more fire power, the battalion grimly held its positions, fighting against German 88s from shallow foxholes, and prevented the enemy from breaking through. General Patch later credited the battalion with saving the whole Seventh Army.

By December the Division, thoroughly conditioned to combat, had reached the Maginot Line and had taken the massive concrete and steel blockhouses at Fort Simserhof. On New Year’s Eve another panzer division hit the 44th near the Saar River, and the 44th inflicted 6,000 casualties on it while turning back 20 vicious enemy attacks. One of the casualties was the first SS Division commander to be captured on the Western Front.

From then on the 44th had comparatively clear sailing. Under the command of Major General William F. Dean, it consolidated its positions below the Saar during January until it was relieved in March after 144 days of combat. In the succeeding months of operations, it rolled deep into Europe as German resistance began to crumble on the southern front, crossing the Rhine, capturing Mannheim, and slashing into the Austrian Tyrol. V-E Day found it firmly established at Imst, Austria, and on that day the 44th made contact with the Fifth Army coming up from Italy.

There are 11 soldiers of the 44th Infantry Division World War II still listed as missing in action. 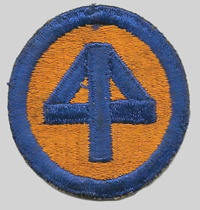