America's best known division, the 42nd, does not believe in hiding its light under a bushel.

Visitors to torn, battered Germany, report that one can follow the path of the fighting 42nd by keeping an eye out for rainbows painted on the sides of buildings.

Let an element of the Division halt for a moment and some GI, paint brush in hand, would splash the red, gold and blue of the rainbow, for all to see.

The 42nd got its nickname in World War I when one of its majors, noting that its personnel was drawn from 26 states and the District of Columbia, said “This Division will stretch over the land like a rainbow.”

The major who inspired the nickname has moved up in grade since that time. He is now General of the Army Douglas MacArthur.

The 42nd was late getting into action against the Nazis, but once in the line, it fought with the same dash which characterized the World War I Rainbow, in the Champagne, Champagne-Marne, and Aisne-Marne offensives.

The Division first faced the Wehrmacht in December 1944, when, under the Seventh Army, it was given the unglamorous role of plugging gaps and weak spots on the army’s right flank near Saarbriicken. Near the middle of February the Rainbows were readied for the attack, and it was at this time that the Division was officially announced as part of the Seventh Army.

A month later, the 42nd made its first penetration of Germany. In bitter weather, the men with the rainbows ’round their shoulders, drove through the Hardt Mountains. Early in April the towns of Dahn and Busenberg fell to the slugging Doughs. These conquests were made doubly difficult by the weather and terrain. Vehicles could not be used on the icy mountain roads, and it was necessary to move in supplies by pack mule.

Rolling east of the Rhine, the 42nd took Fiirth and Schweinau, drove on to capture Schweinfurt, and then joined in the assault on Nürnberg.

The 42nd was the first division to reach Munich, and from Munich it went on to infamous Dachau, and helped liberate 32,000 inmates of this nightmarish Nazi prison camp.

The Rainbows moved into Austria, collecting prisoners by the thousands. One of the Nazi “prizes” to fall into the Rainbow’s hands was Major General Wilhelm, German communications chief.

There are 33 soldiers of the 42nd Infantry Division World War II still listed as missing in action. 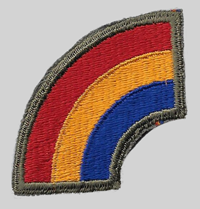