“Take a look at the record, buddy.”

That’s the answer a soldier of any other division gets when he challenges the claim of 3d Infantry Division Doughboys that their outfit—“The Fighting Third”—is the best in the Army.

The 3d has a superlative record, not only in this war but in World War I, when it earned the nickname “Rock of the Marne” because of its impregnable stand against the Germans’ last great counteroffensive. Its participation in three major battles in 1918 is symbolized by the three diagonal stripes of its shoulder patch.

The “Fighting Third” is the only American division which fought the Nazis on every front in this war—North Africa, Sicily, Italy, France, and Germany. It has had more casualties—nearly 35,000—than any other division, and it holds the record for high combat citations, no fewer than 32 of its officers and men having won the Medal of Honor.

The 3d’s first D-day came on November 8, 1942, when it spearheaded the landing near Casablanca and, in three days of sharp fighting, took a good slice of French Morocco and was in position to storm Casablanca when the French surrendered. In the final stages of the Tunisian campaign the Division was moved across Algeria by truck and was about to go back into action when the Afrika Korps was knocked out for good.

After two months of training, the 3d went ashore on D-day of the Sicilian campaign. The Division’s capture of Palermo was sensational. The Doughboys moved so swiftly that when American tanks and armored cars raced in to take the city, they found it already occupied by the footsloggers. And when the last enemy stronghold on Sicily—Messina—fell to the Allies, it too was taken by the 3d.

At Salerno, the Fighting Third took over the beachhead and pushed the Germans northward and broke through the defenses of Acerno, enabling the British to enter Naples. The Division punched ahead and participated in the bloody crossing of the Volturno.

When the Anzio campaign was launched the Sd again drew “the short straw.” Its Doughs splashed ashore in the first wave at Anzio, and for the next four months held on to its toehold in the face of the most furious counterattacks of the war. It was here that the 3d established the record for the most casualties suffered in any one day by an American division.

In the big May push the 3d figured prominently in the liberation of Rome. With only a few days of rest the men started training for their next operation—the invasion of southern France.

Led by Major General John Wilson (“Iron Mike”) O’Daniel, the 3d took more than 1,000 prisoners in its first twenty-four hours on French soil, and began a race that carried to Avignon and the Rhone River, then toward the Allied armies which had broken out of Normandy.

The fortress city of Besançon fell in two days, but during October the Division advanced slowly and bloodily in front of the Vosges Line. In November the breaching of the line was completed, and the Doughs moved into Strasbourg.

For its superb fighting on the northern perimeter of the Colmar bridgehead, when it battled through snow, storms, enemy-infested marshes and woods, and over flat plains crisscrossed by unfordable streams, the entire Division was cited by the President. Then, as a major unit of the Seventh Army, the 3d Division drove across the Rhine and deep into Germany. The 3d played a major role in the fight for Nürnberg, and were the first American troops in Augsburg, Munich, and Berchtesgaden.

On V-E Day the “Fighting Third” was at Salzburg, and was using as a messhall the dining room of Schloss Klessheim, where Hitler once housed his more important guests.

There are 153 soldiers of the 3rd Infantry Division World War II still listed as missing in action. 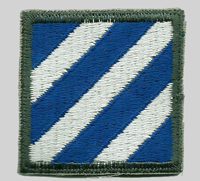