In May 1942, the 37th Division sailed under the Golden Gate.

Today, more than 3,500 “Originals” form the nucleus of Ohio’s fighting “Buckeyes” who have conquered the Japanese at New Georgia, Bougainville, and at Manila and Baguio in Luzon.

Few outfits in the Pacific have seen more of the enemy, and killed more of the enemy, than the belting Buckeyes. From the time in 1943 when they drove ashore at New Georgia, until they chased Yamashita and his puppet government from the hills of Baguio, summer capital of the Philippines, almost two years later, the men from Ohio have faced the enemy almost continuously.

Despite the 37th’s magnificent spearheading of the drive that liberated Luzon and recaptured Manila, the Buckeyes probably will be best remembered by historians for their slaughter of the Japanese on Bougainville in the Northern Solomons.

The 37th hit Bougainville in November of 1943 as part of a Marine amphibious corps and won its beachhead on Empress Augusta Bay with comparative ease. But three months later the same 40,000 Japanese who had been pushed across the hills struck in full fury, and the bloody second battle of Bougainville was on. The Japanese attack was led by the 6th Division, one of the Imperial Army’s best and the Division which perpetrated the rape of Nanking.

Four times the Japanese, backed by concentrated artillery fir, slashed at the 37th’s defense lines. And four times they were hurled back with a loss of 8,000 men. The heaviest fighting was concentrated on Hill 700, the “Hill of Heroes,” the 37th calls it. The battle raged here in an area not more than 100 yards long and 50 yards wide. Hill 700 and nearby Hill 260, where some of the most bitter hand-to-hand fighting of the war was fought, are now classrooms for the training of replacements.

On January 9, 1945, the Buckeyes came ashore on D-day at Lingayen Gulf and spearheaded MacArthur’s return to Manila, which was reached on February 4. The Doughboys of the 37th walked and fought the full 142 miles from Lingayen to Manila. In the capital of the Philippines the Buckeyes had to forget all ^bout jungle fighting, at which they were masters, and adopt a new kind of warfare—street fighting.

Every building was a fortress, every street corner was a machinegun nest. Thousands of mines had been sown by the Japanese and booby traps abounded. But the Buckeyes beat the Japs at their own game, and when the city finally fell the 57th had accounted for 12,000 dead Nips.

From Manila and its stifling heat the Buckeyes moved into the mountains in northern Luzon, and in conjunction with the 33d Division liberated the mile-high city of Baguio, anchor of the Japanese northern defense line. It was from Baguio that General Yamashita and President Laurel, puppet head of the Philippines, fled to what Tokyo Rose called a “more central location".

When the news of Germany’s surrender came the 37th was too busy to celebrate. It was working in treacherous Balete Pass, the southern gateway to the Cagayan Valley and Luzon’s northern coast.

Shortly after, the men of the 37th, who wear as a shoulder patch a red-and-white disc which appears on the state flag of Ohio, broke into the valley and eliminated the thousands of Japanese defenders there.

There are 25 soldiers of the 37th Infantry Division World War II still listed as missing in action. 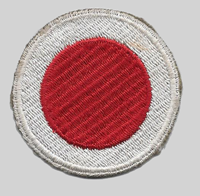