When the 35th Infantry Division was fighting in France in World War I, it had an inconspicuous captain of artillery named Harry S. Truman.

Twenty-seven years later, this same Harry Truman, now President of the United States, stepped ashore at Antwerp on his way to the Potsdam Conference with Churchill and Stalin, and inspected a guard of honor from the 137th Infantry, one of the regiments of his World War I Division, the fighting 35th.

Lining the President’s route from Antwerp to Brussels were 1,600 Doughboys from the same regiment, all wearing the same Santa Fé cross on their shoulders that the President wore against the Kaiser’s armies.

The President was well guarded. The men of the 35th who lined the streets to honor and protect their commander-in-chief wore five battle stars, and could tell of fighting with five armies in the battle to crush the Nazis.

From the time the Santa Fé Doughs hit Omaha Beach in France in July 1944, until the Germans surrendered to the might of the Allied forces, tiiey served with the American First, Third, Seventh, Ninth and Fifteenth Armies, and fought the Wehrmacht from St.Lô to the Elbe River.

The 35th was in the line two days after hitting Omaha Beach and began battling toward, and finally into, rubble-strewn St.Lô. It fought its way across the Cherbourg peninsula, blasted Vire, and, in one of the most vicious battles in France, repulsed a counterattack that threatened to overrun Avranches. Despite heavy casualties, the Santa Fé men swung east to recapture important terrain near Mortain, and rescue the 30th Division’s “Lost Battalion.”

Spearheaded by the machines of the 4th Armored Division, the 35th rushed still farther east to take town after town. Once it hit the Le Mans-Orléans highway, it drove to the important stronghold of Orléans and captured it in a night and day of savage battling.

The 35th continued to drive straight across France. It spanned the Loing, Seine, Loire, Marne and Meuse Rivers. In mid-September, still rolling at top speed, it liberated the city of Nancy. For three months the Santa Fé patch boys kept moving forward, and on December 5 fired their first round of ammo into Germany. They swept past Sarreguemines, and then crossed the Saar.

Then Rundstedt launched the Battle of the Bulge.

The Santa Fé then made three great jumps. It was shifted to the First Army and, during the Christmas holidays, plunged into battle. Despite terrific punishment, the 35th repulsed attacks by four crack German divisions and eliminated the threat to the right flank of the Bastogne highway.

This threat ended, the Santa Fé made a dramatic leap to the Seventh Army in the south, where a breakthrough was threatened. Again the 35th held, and was ready for a third and even more sensational jump. In bitter weather it was rushed 292 miles north to join the Ninth Army.

It reached Rheinberg, and was the last of the Ninth Army elements to gain the Rhine. Worn from constant battles, the Santa Fé Doughs banged away at the Germans trapped in the Wesel pocket, and drove into the Ruhr. It met bitter opposition all the way, but it would not be stopped.

Later, the 35th Division joined the Fifteenth Army, and at the war’s end had taken more than 20,000 prisoners, and received more than 3,000 awards.

There are 46 soldiers of the 35th Infantry Division World War II still listed as missing in action. 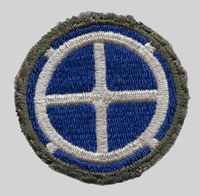