If the U. S. Army operated on a “finders keepers” policy, the Doughboys of the 33d Infantry Division would be the richest soldiers in the world, with every man a near millionaire.

None of the sourdoughs in the Alaskan Gold Rush struck it as rich as the Doughs of the 33d did in their campaign against the Japs on Luzon in the Philippines. Shortly after going into the line on Luzon the 33d, which is officially known as the “Prairie” Division, earned the unofficial nickname “The Money Division.” In attacking the fortified city of Rosario the 33d’s artillery scored a direct hit on buried treasure along the highway, hurling prewar silver pesos all over the landscape. The loot, which had been stolen by the Japs and buried as they retreated, was estimated at half a million dollars, and required four trucks to haul it away.

A few days later artillerymen digging new gun positions unearthed $70,000 more in pesos. But it was not until the 33d was battling for Baguio, in the Benguet Mountains, that it really struck it rich. After hard fighting the men of the Prairie recaptured twelve gold mines, including some of the richest in the world. The seven large mines taken by the gold diggers produced 750,000,000 pesos in gold in the year before Pearl Harbor.

June 19, 1945, marked two years of foreign service for the Joes who wear the golden cross on the black circle on their shoulders. The 33d sailed from San Francisco in July 1943 and guarded vital installations in Hawaii until April 1944, when it moved to New Guinea. After participating in the Wakde-Sarmi operation, the Golden Crossers jumped off on Christmas Eve of 1944 for the second Battle of Morotai in the Netherlands East Indies.

The 33d entered the Battle of Luzon on February 10, 1945, relieving the 43d Infantry Division and opening the drive to Baguio, summer capital of Luzon, and headquarters of General Yamashita. The Japs had elected to make their last-ditch stand in and about the mile-high city of Baguio, and the 33d, working with the 32d and 37th Divisions, was in for many bitter battles with the desperate Nips.

For three months the 33d was engaged in savage mountain fighting, over the most rugged terrain of all Luzon. The battles were sharp and severe against an enemy who fought and died on his hilltop positions. There was no easy route to Baguio; it was uphill over the mountains all the way, and the Division had to make its roads as it went. At the beginning of the campaign the 33d had a division front of 20 miles. Three months later, just before the capitulation of the city, the Golden Crossers were fighting on a 65-mile front.

The 33d opened its drive by capturing the key towns of Rosario and Aringay, but to accomplish this it had to wage two vicious battles at Bench Mark and Question Mark hills. The 33d was one of the first divisions in the Pacific to prove to the Japs that they were not the only soldiers capable of successful night attacks. It was in surprise attacks at night that the 33d seized Galiano and Asin which provided the Americans with an all-weather road for the final drive on Baguio.

Several thousand persons, including Brigadier General Manuel Roxas, former aide to General MacArthur, were rescued from the Japs at Baguio, and most of them escaped through the 33d Division lines. Staff Sergeant James Lindquist, of Bloomfield, Connecticut, had the honor of leading General Roxas through the lines. The sergeant, with a carrying party, met the fleeing general on the outskirts of the city, and under the noses of a Japanese outpost patrol. The 33d also liberated Milagros Osmena, daughter of the President of the Philippines.

There are 32 soldiers of the 33rd Infantry Division World War II still listed as missing in action. 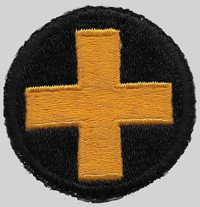