On March 20, 1945, one phase of the European War ended and another was ready to begin. When, on that day, the Third and Seventh Armies made a junction 12 miles west of Kaiserslautern, in southwestern Germany, they sealed the fate of some 70,000 Germans trapped in the Saar Palatinate, and virtually eliminated the last enemy resistance west of the Rhine.

The 6th Armored Division represented the Seventh Army in that significant meeting. And the Third Army colors were carried by the “Yankees” of the 26th Division.

There are plenty of soldiers from all over the country, including the deep South, who now proudly wear the “YD” monogram on their shoulders, but the original Yankees were Massachusetts National Guardsmen who went on active duty nearly a year before Pearl Harbor.

In World War I, the 26th led all other Guard divisions in numbers of combat decorations, but in World War II the Division thought for a while that it might not earn any at all. It wasn’t until after nearly four years of training that the Yankees had a chance to play for keeps.

On September 29, 1944, the 26th went into action on the Third Army front southeast of Verdun, taking up positions between the Meuse and the Moselle Rivers. Within a month, the outfit had seen plenty of action east of St.Mihiel, near Nancy, and north of the Forêt de Parroy. Till early November, however, the 26th had primarily defensive missions.

But on November 8th came the order the Yankees had been waiting for—“Attack!” The Third Army set out to reduce the fortress of Metz. The 26th didn’t go after that city. Instead, operating on the southern flank of the assault forces, it advanced 50 miles in a month, crossing the Seille and Saar Rivers, pushing through rugged enemy resistance, and fighting under weather conditions so adverse that its supporting armor and other forces couldn’t maneuver effectively, compelling the 26th’s Infantrymen to fight on their own.

They did well, taking Morville, by-passing Dieuze to go after Sarreguemines, and, on December 12, plunged into Germany itself at the Blies River.

On December 14, the Division returned to Metz, and a few days later rushed to the aid of the First Army in the Ardennes sector. On Christmas Day, the 26th celebrated its arrival at the scene of trouble by launching an attack on the south side of the German salient extending into Belgium. Many units in that area were trying desperately to break through the German lines and relieve the 101st Airborne, making its stand at Bastogne. One of the first outfits to reach the beleaguered forces was the 26th. Santa Claus himself couldn’t have been better received.

There are 27 soldiers of the 26th Infantry Division World War II still listed as missing in action. 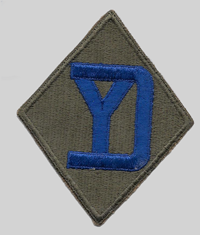