No other division in the history of the United States Army was ever so quickly in combat after it was formed as the 25th, or “Tropic Lightning” Division. It was but a baby of two months, stationed on Oahu in the Hawaiian Islands, when the Japanese attacked Pearl Harbor.

Activated from elements of the Hawaiian Division’s Regular Army troops in October 1941, it was burying its dead on December 7.

All through 1942, the 25th fretted for a chance to gain revenge against the Japanese. The chance came early in 1943 when the men who wear the Spanish red taro leaf, with a lightning flash on it, cleared for Guadalcanal. The infantrymen went ashore on the open beaches west of the Tenaru River. Their mission was to drive inland 14 miles, envelop the Jap south flank, reduce strong enemy positions on Mt. Austen, and seize the corps objective 3,000 yards to the west.

The rough and broken terrain made supply, communication, and evacuation of wounded extremely difficult. Lack of suitable maps was another handicap. And the Japs were there in abundance.

But the “Tropic Lightnings” slashed forward, and by the 15th of January the Japanese were bottled into three main pockets. The 27th Infantry Regiment fought the Japs in the open. The 35th Infantry fought them in the thick jungles of Mt.Austen. Some of the meanest fighting of the Pacific war was done by the 25th in clearing the stubborn Japs from these pockets. Early in February, the 161st Infantry made a junction with other division units near Cape Esperance, and the Nipponese occupation of Guadalcanal was over.

After five months of training and conditioning on the ’Canal, the 25th joined in the New Georgia fight for the vital Munda airfield. The 161st was the first to reach New Georgia, and so fierce was the opposition, so miserable the weather, that the 161st required nine days to fight its way to its line of departure. By this time the 27th Infantry had joined the battle, and, in a historic 19-day march through the jungles and mud, secured the important harbor of Bairoko. Following these campaigns, the men of the 25th cleaned up Arundel Island, and fought a bloody battle to secure Vella Lavella Island.

The Division, after eleven months in the jungles, was sent to New Zealand for a well deserved rest. From there it went to New Caledonia, where replacement brought it back to strength.

The “Tropic Lightnings” landed on Luzon two days after the initial assault, and went into the line a week later. Attacking between the 6th and 43d Infantry Divisions, they captured Binalonan and cut Highway 8. The Japs counterattacked furiously at Binalonan, but the 25th held, capturing a tremendous ammunition dump.

The 25th fought a savage five-day battle for the town of San Manuel. The Japs had dug in their tanks, and every building was a fortress. The Nip force consisted of the bulk of their 2nd Armored Division. The 25th’s brilliant assistant division commander, Brigadier General James Leo Dalton, II, was killed in the battle for San Manuel.

During all this action the 25th was holding the left flank and engaging the might of the Jap armor, while other American units were dashing toward Manila. In the Luzon fight the 25th knocked out more than 250 Japanese tanks, mostly with infantry assault weapons, and killed more than 6,500 Nips.

There are 53 soldiers of the 25th Infantry Division World War II still listed as missing in action. 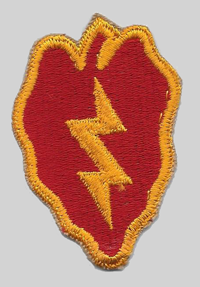