It was on Oahu when the Japs threw their sneak punch at Pearl Harbor, and the men of the Victory Division have been paying back the Nips ever since.

The 24th started its slaughter of the Japs in April of 1944 when, in what has been called the most brilliantly conceived and executed tactical maneuver of the Pacific war, it landed in New Guinea for the Tanahmerah-Hollandia operation. In four days the Division had wrested the vital Hollandia airdrome from the enemy, and this was accomplished with only 52 battle casualties. By June 6, the Victory men had killed 1,777 Japs and taken 502 prisoners, and had lost a total of only 43 men killed and 70 wounded. Elements of the 24th then went to Biak and aided the 41st Division in capturing Sorido and Boroke airdromes.

But it was on Leyte, where the backbone of the Japanese defense of the Philippines was broken, that the 24th proved itself one of the great fighting outfits of the war. The men came in on Red Beach, and it was an inferno. Jap mountain guns flayed the landing boats. Zekes and Bettys sprayed the beach.

The dunes were raked by enemy mortar, machinegun and small-arms fire. But the 24th landed and kept moving. The 19th Infantry Regiment drove up vital Hill 522 before the Japs, who had abandoned this commanding bit of ground during the naval bombardment, could reoccupy their positions. The 34th Infantry Regiment pushed straight inland, repulsing counterattack after counterattack.

The 24th bore the brunt of the fighting on Leyte. It fought the Jap at the crossroads, in the villages, in the rice paddies, along the banks of dirty streams, stalked him through the hills, and rooted him out of his dugouts. For 78 consecutive days, a Pacific record at the time, the men of the 24th were in constant combat, and they killed a counted 7,179 Japs.

The 2nd Battalion of the 19th Infantry is known in the Pacific as the “Lost Battalion” of World War II. In a wide flanking movement designed to put a strangle hold on the Japanese “lifeline” road at Ormoc, the 2nd Battalion remained 13 days behind Japanese lines. Cut off from supplies and unable to evacuate its wounded, the battalion held, despite daily banzai attacks by the desperate Japanese.

But there was no rest for the weary after Leyte.

Elements of the 24th were pulled directly from the line and went to Mindoro as part of a task force, while other elements landed and secured Marinduque.

With only a short rest, the fighting 34th Infantry was attached to the 38th Division to spearhead the landing of that outfit above Subic Bay at the tip of Bataan Peninsula. The 34th led this assault all the way to Zig-Zag Pass, that treacherous divide where the Japanese had prepared a main line of defense. The 34th broke through the pass.

One battalion of the 34th was given the honor of making the amphibious assault on Corregidor. It hit the beach on February 16 while the 503d Parachute Infantry landed on Topside. For nine days the men stood up against—and beat back—fanatical Nip attacks.

Later the Victory men were given the job of mopping-up operations on Verde, Lubang, Romblon and Simara Islands. They didn’t miss a Jap. The 24th really remembered Pearl Harbor.

There are 77 soldiers of the 24th Infantry Division World War II still listed as missing in action. 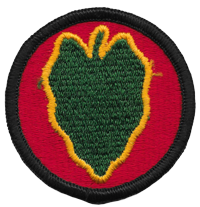