Major General Orlando Ward was in action during only a few months of the European War, but he saw its beginning and its end. Arriving in North Africa in November 1942, with die 1st Armored Division, he was wounded in Tunisia the following April, and returned to the United States. Just two years Liter, he came back to action as commanding general of die 20th Armored, one of the last American divisions to be committed to batde in the European Theater of Operations.

The 20th Armored had made itself felt long before it went overseas. Thousands of men trained in its ranks had been shipped to Europe and .assigned to other fighting units as armored replacements.

But not until April 1945, did the Division get a chance to do some fighting under its own colors. Then it turned up on the Seventh Army front in southern Germany, as part of the force advancing on Munich- On its way, smashing into Salzburg just behind spearheading elements of the 3d Infantry Division, the 20th Armored bagged a banner crop of high-ranking Nazis, including three lieutenant generals, a major general, and Dr. Paul Schmidt, chief of the Press Department of the German Foreign Office.

Herr Dr. Schmidt was an especially rich find. When he was nabbed, he had with him a brief case containing 85,000 Cerman marks and 1,000 kroner.

After swinging south of Munich to cut off German escape routes from the falling city, the 20th Armored Division moved into an area north of Lake Chiem and, in June, was stationed at Traunstein, Germany.

When the 20th's commander left the front, in 1943, the vaunted Afrika Korps was still very much in action, and the Allies were still wincing from the blows they had taken in such battles as Kasserine Pass. When he got back, there was no Afrika Korps, and there were very few corps of any kind doing anything but moving backward fast, or surrendering. It was a contrast any American would have enjoyed.

There are 1 soldiers of the 20th Armored Division World War II still listed as missing in action. 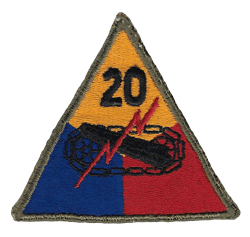