The first formed Division in Marine Corps History, the 1st Marine Division was activated in ceremony aboard the battleship USS Texas on 1 February 1941. In May, the 1st MARDIV moved to Quantico, VA and Parris Island, SC and in less than six months following the Japanese attack on Pearl Harbor, began shipping overseas. First of many stops for the men of the 1st were in New Zealand and Samoa in the South Pacific. A patchwork of deployment found Marines in Fiji, Samoa, Wellington and New Caledonia then following rehearsal landings in the Solomon Islands they would begin their first campaign on Guadalcanal 7 August 1942.

The Marine task force under the command of Navy Vice Admiral Frank Fletcher's Task Force 61 would fight on the "Canal" until 9 December 1942. This operation won the Division its first of three World War II Presidential Unit Citations (PUC). The Guadalcanal Campaign included battles of Savo Island, Tenaru, Henderson Field, Lunga Point, Edson's Ridge, Matanikau and Cape Esperance would cost the division dearly. However, the Japanese were not the only enemy as Malaria was as stubborn claiming thousands of casualties.

Following the Guadalcanal Campaign the Division was sent to Melbourne, Australia for a rest and refit. During this time they adopted the Australian folk song "Waltzing Matilda" as their battle hymm. Their stay in Australia lasted nearly a year before their next campaign in Eastern New Guinea and New Britain. The men of the Blue Diamond landed at Cape Gloucester on 26 December 1943 and remained until March 1944. Following this battle they went to Pavuvu and island in the Russell Islands for another rest.

In September they began the intense campaign, the Battle of Peleliu. Landing on the 15th the Marines would be engaged for a month in their bloodiest battle surpassing Guadalcanal. Engagements at locations known as Bloody Nose Ridge, the Umurbrogol Pocket and airfield facilities cost the Marines over 6500 casualties including over 1200 dead in fighting that would earn them another Presidential Unit Citation.

After another 5-6 month refit, the 1st Marine Division would participate in the Battle of Okinawa, landing on 1 April 1945. The division was in heavy fighting on Okinawa until 22 June 1945, when the island was declared secure. They had participated in battles at the Dakeshi Ridge, Wana Ridge, "Sugarloaf Hill" and Shuri Castle earning the division another PUC. This would be that last World War II battle for the men of the Blue Diamond as replacements and reinforcements were being trained at Camp Pendleton when the Atomic Bombs were dropped and Japan surrendered in September. 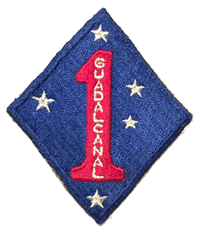