The 1st Cavalry Division and the 37th Infantry Division staged one of the hottest competitive races in modern warfare for the honor of being the first to reach the city of Manila.

The race started at Lingayen Gulf, and the 1st Cavalry wror. by a few hours, thanks to a final all-out blitz that carried it 114 miles in 60 hours. By being the first troops to reach the capital, of the Philippines the 1st avenged General Jonathan M. Wainwright, courageous defender of Corregidor and Bataan, and a former brigade commander of the division.

One of the “Hell for Leather” Division’s first orders in Manila was to punch forward, at any cost, and relieve the some 4,000 civilian internees in Santo Tomas University. In a spectacular dash through the barricaded, burning city, and with the enemv defending from every house and building, the 1st, with Sherman tanks as a spearhead, overwhelmed the Japanese garrison at the University and liberated the near-starved internees.

The 4,000 prisoners, most of them American citizens, never will forget the shoulder patch of the 1st—a large shield o: Cavalry color, yellow, with black diagonal bar and horse’s head in upper right hand corner. The bar si in name and battle.

Dismounted early in 1942, the 1st Cavalry Division landed in Australia in July of 1943, and for months slaved at amphibious training and jungle fighting methods. It was a hard-hitting Doughboy outfit, ready to carry on the tradition of successes that elements of die division had started in the Civil and Indian wars, when it invaded the Admiralty Islands in February 1944. The Division landed on Los Negros Island and, despite intense opposition from the Japanese, swept inland to seize and secure Momote airstrip within half an hour. It also captured Manus Island, later to be transformed into one of the Navy’s great Pacific bases.

The Division next went into combat in the bloody battle for Leyte. For its action there, against the finest Japanese combat divisions, the Division was cited. The former horsemen, who dote on speed of attack, established a near record when, within five horns after hitting the beach, they took the heavily defended Cataisan airfield, and, a day after landing, captured Taclobân, capital of Leyte. Also, they took the nearby island of Samar.

No Doughboy outfit ever fought with greater courage and stamina than did the 1st when it was given the mean task of securing and holding the mountainous country separating Ormoc and Leyte valleys. For 42 days of the monsoon season the men endured what General Walter Krueger described as “the most brutal terrain and conditions American soldiers have ever been asked to stand.” The rainfall was torrential, and often it rode on the wings of gales that reached 80 miles per hour. They sweated it out during the day and near froze at night. Food, ammunition, and medical supplies had to be brought in by air drop, by native carrier trains, and by carabao pack. They fought their way up trails knee-deep in mud, waded neck-deep jungle streams, while under almost constant artillery, mortar and small-arms fire. There was much hand-to-hand work with the fanatical Japs, and on several occasions cooks, engineers, signal, and quartermaster units were used in the line. For each of its own soldiers killed on Leyte, the 1st accounted for 24 of the enemy.

The 1st Cavalry Division is rough, tough and rugged, and proud of it. But it is equally proud of being just about the most spit-and-polish outfit of them all. There is a saying in the South Pacific that when you see an MP, up to his waist in mud, but with shined shoes and wearing white gloves, you know you are close to the 1st Cavalry Division.

There are 55 soldiers of the 1st Cavalry Division World War II still listed as missing in action. 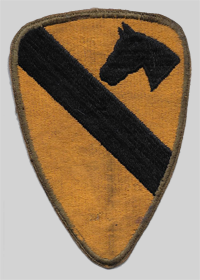