No American division ever made a more spectacular or hazardous entrance into combat than did the 17th Airborne.

Comfortably billeted in England one day, 17th troopers were in the battle zone near Reims the next, ready to throw their power against Rundstedt’s best in the Battle of the Bulge.

With Rundstedt’s troops grinding forward, the Allies needed all men available. Under cover of darkness, and in treacherous flying weather, the 17th boarded transport planes and was flown to the battle zone.

The men who wear the grasping eagle’s claws against a black background on their shoulder patch were given a terrific assignment their first time out. They relieved the 11th Armored Division, south of historic Bastogne, and went into the line between the 101st Airborne Division and the 87th Infantry Division.

Their mission was not to hold, but to attack. And attack they did. Scorning a fanatical foe, swirling snow, roadblocks, and thousands of mines, the 17th drove forward. The troopers slashed into Cetturu, and on to Bouitet, Steinbach, and Limerle, cutting vital highways.

By the end of a month of bitter fighting the men of the 17th broke into Germany near the town of Wiltz.

In February the Division was engaged along the Our River, its job being to hold a bridgehead south of Cleveaux, Luxembourg. In a pre-dawn attack it was one of the units which crossed the Luxembourg-German border along a 22-mile front, and pushed into the Siegfried Line. The men forded the Our River just east of Clerf. Fighting alongside the 6th Armored Division, the 17th captured Dasburg and established a supply line across the Our River.

In March came one of the most successful airborne operations of the war, a feat that helped set up the final drive to Berlin and Nazi capitulation. As part of the First Allied Airborne Army, the 17th helped in the crossing of the Rhine just below the Netherlands border. In dropping across the Rhine the division employed 3,000 gliders without the loss of one due to enemy action. The landing of troops in this dramatic thrust by the First Allied Airborne Army began northeast of Wessel, Germany, and the big march was on. Dorsten fell, then Haltem, followed by Diilmen, Appelhausen, and Münster.

Order a DVD with combat footage of the 17th Airborne Division in Operation Varsity.

There are 13 soldiers of the 17th Airborne Division World War II still listed as missing in action. 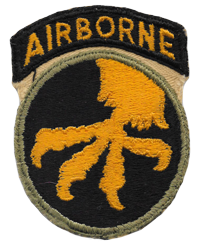