The 14th Armored is not known as the “Liberator” Division for nothing.

It has earned that name.

In its more than 500 miles of ranging over Germany and Nazi- held territory the men and machines of the 14th Armored freed more than 20,000 Allied prisoners of war.

And it was poison to the German war machine.

Nothing German was safe from the hurtling 14th. It captured 2,000 railroad cars and took intact 100 locomotives. It seized 200 factories and before the Nazi collapse it had liberated or captured 1,000 citics, towns and villages.

Activated at Camp Chaffee, Arkansas, in 1942, the 14th Armored Division was destined to fight with two armies in the liberation of Europe—the Seventh and Third.

The 14th Armored saw its first combat in the Vosges Mountains. TTere it breached the Nazi defenses and poured out into the broad Alsatian plain, where it launched a drive from Hagenau that culminated in tlie capture of Wissembourg and tlie crossing of the German frontier.

No armored division played a bigger part in thwarting Rundstedts counteroffensive than did the 14th. It was largely due to die 14th’s do-or-die stand that the Nazis’ hope for overrunning Alsace and recapturing Strasbourg was foiled. For days the 14ih Armored fought a terrific defensive battle against vastly superior strength.

At Hatten and Rittershofen the Germans threw three dissions—two panzer and one panzergrenadier—at the 14th Armored. The Division came out maulea and bloody, but Strasbourg, which hung in the balance during the melee, was not recap tured by the Nazis.

The 14th Armored again went on the offensive when it cracked the Siegfried Line at two places and drove to the Rhine at Cermershcim. It rolled across the Rhine at Worms and captured Lohr, Bad Bruckenau, Neustadt and other towns. Then it swung south and liberated 5,000 prisoners at Hammelburg, and outflanked Bayreuth and Nürnberg. The 14th Armored then was transferred to Patton's Third Army. Teamed with the 86th Infantry' Division, the 14th took Augsburg and drove to the infamous prison camp at Moosburg where 110,000 Allied prisoners were held.

The Americans gave the German garrison five hours in which to make an imconditional surrender. SS troops opened fire on the Yanks. Ninety minutes later the tanks of the 14th Armored were rolling through the prison camp.

In its last long dash the Liberators crossed the Danube and pushed to the Isar River. They were still rolling, still flattening the Nazis when the war ended.

There are 18 soldiers of the 14th Armored Division World War II still listed as missing in action. 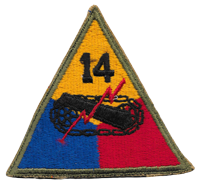