Someone must have tied a can to the tails of the "Ilcllcats” of the 12th Armored Division when they rolled into Bavaria to tangle with crack troops and armor of the Nazi Army. For 37 days the men and machines of this slugging outfit lashed at the Wehrmacht without let-up, and at the finish had compilai an astounding combat record.

In this drive the Hellcats knocked most of Bavaria off the German-held map, conquering 22,000 square miles. They lilier- ated 8,418 Allied prisoners of war (mostly Americans), and freed 20.000 slave laborers. But they captured prisoners even faster than they released them. When the 12th Armored had completed its drive through Bavaria, 63,000 Cermans were enclosed in its barbed-wire stockades.

The outfit first hit combat in December 1944, near the Maginot Line in France. It helped in the closing of the Colmar pocket, and then swing north to the Siegfried Line. In hard fighting, it spearheaded the Third Armvs drive for the encirclement of the Germans in the Saar, and then went back to the Seventh Army for the push across the Rhine.

Probably the Hellcats’ biggest achievement—and it ranks with the top feats of the war—was the capture intact of a bridge across the Danube at Dillingen. This job was of tremendous help to the advance of the Seventh Army into Austria, allowing the Americans to pour men and supplies across the Danube in a ceaseless flow. Because of a garbled radio message to headquar-ters, this vital bridge came close to not being used. An officer radioed, “Have bridge of Danube, and it’s blue.” Somehow, the “blue” was changed to “blown" and headquarters was searching for another bridge when the correction came through.

A poll conducted by the Hellcat News revealed that the Doughs of the 12th Armored considered the capture of the Alsatian town of Herlisheim their toughest job.

It was in defense of this small village, situated on what 12th Armored Doughs and Tankers call “Purple Heart Plain” that the Division wrote the bloodiest chapter in its history. For 12 days the Hellcats fought two crack divisions, the 10th SS Panzer and the 553d Volksgrenadier. Wave after wave of German infantry and tank combinations smashed at the Hellcat front. The 12tli Armored, barely a month in combat, repulsed them all.

On March 17, the Ilellcats jumped off near Trier to spearhead the Third Armys assault on the Rhineland. The Germans threw everything they could muster in defense, but the Hellcats reached the Rhine in three days, and in three more they occupied Ludwigshafen, Speyer and Germersheim.

Eight days later the 70th found itself as the point unit in the Seventh Army’s drive across southern Germany. Tt was in this lightning strike that the Dillingen bridge was captured, providing an artery through which Allied troops flooded into southern Germany for die climactic campaign of the European war. The enemy tried everything to knock out the precious span, but the 12th Armored held it against aircraft and artillery attack until troops of the 3d Infantry Division arrived to take over the job.

The Hellcats them took to the trail, once again as the tip of the Seventh Army's flying wedge. With the Germans on the run, the 12th Armored captured airfields, planes, war factories, and thousands of prisoners. It liberated 2,800 prisoners from Landsberg Prison, where Hitler wrote Mein Kampf.

It took the 12th Armored but 37 days to clear a path from the Rhine to Austria.

There are 37 soldiers of the 12th Armored Division World War II still listed as missing in action. 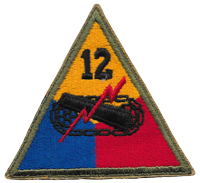