For many months, the Allied forces in Italy struggled slowly toward a junction with the Seventh Army, fighting on the southern flank of General Eisenhower’s forces on the Western Front. Finally, just before V-E Day, two American units met in Italy, south of the Brenner Pass—the Fifth Army’s 88th Division, and the Seventh’s 103rd.

The soldiers who wear a giant cactus on their shoulders had driven down through the pass where Hitler and Mussolini had connived. The “Cactus” Division had come from a triumphant entry into Innsbruck, capital of the Austrian Tyrol, which had been taken by the 409th Infantry Regiment to the accompani-ment of a wild ovation from the Tyrolese.

But it wasn’t all glory and cheers for the 103rd.

They had some hard battles starting on November 9, when theÿ went into combat and helped the VI Corps of the Seventh Army launch its attack through the Vosges Mountains. The Cactusmen, after crossing a river and taking a key hill dominat-ing St. Die, had cracked through the mountain and 14 days later; spilled out into plains beyond. And one of their units, Company I of the 411th Infantry, had staked a claim to being the first Seventh Army outfit to touch German soil, when it fought its way into Wissenbourg.

In December and January, the Germans counterattacked, just as they were doing in the Ardennes up north, and the 103rd saw hard fighting as it helped to stem the enemy tide. On January 25 and 26, the Cactusmen were conspicuous in crushing a German salient at Schillersdorf, as the Nazis made their final all-out bid to retake Alsace.

A little later, the Division crossed the Palatinate border at the same spot the Seventh Army had occupied three months earlier, before the German counteroffensive had forced it to withdraw temporarily. Then, in the rugged Hardt Mountains, the 103rd took on some of the toughest enemy positions, and crawled successfully past the concrete pillboxes the Germans had installed to defend the area.

After its junction with the Fifth Army, the 103rd returned to Innsbruck and went on guard duty there. When the war ended, the Cactus Division organized sight-seeing tours for its soldiers who had already traveled so far. One private first class was asked for his opinion of these tours, and his answer might have been made by any GI in Europe. "I'd like to see some of the places I went through on the double with my nose in dirt," he said.

There are 16 soldiers of the 103rd Infantry Division World War II still listed as missing in action. 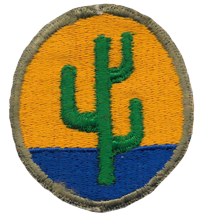