The dougboys' dream—a ringside seat at a decisive battle, with someone else doing the fighting—came true to the footsloggers of the 102nd Infantry Division.

One of the last battles fought in Germany, just before the unconditional surrender of the Nazi war machine, was fought near Tangermiinde, and the men who call themselves the Ozarks, and who wear an O and a Z on their shoulder patch to prove they aren’t fooling, were witnesses, not participants.

The battle was fought between the Russians advancing on the Elbe River, and the Nazis who were trying to get across the river to surrender to the men of the 102nd.

The fire fight went on for hours, but the Ozarks didn’t dare join in—even if they had craved another chance at combat—for fear of hitting the Russians. So, they just took it easy on their bank of the river, and watched the Reds and the Nazis slug it out.

The Germans finally managed to cross the Elbe, cutting through thousands of civilians who were retreating in face of the onrushing Reds, to lay down their arms to the 102d. They then boasted of their cleverness in escaping the Russians. These German soldiers, craven quitters, were the last elements of the once mighty German Ninth and Twelfth Armies.

The Ozarks went overseas in September 1944, but did not see action until near the end of the year. Serving under the Ninth Army, the Ozarks entered combat near the Roer River, taking Lovenich, and then fighting in the Miinchen-Gladbach area. Late in February 1945, the Ozark Doughs spearheaded the Ninth’s crossing of the Roer, and then attacked north, toward the Rhine. In their dash to the Rhine, the “Hillbillies,” as they do not mind being called, overran 86 towns and cities.

One of the most important spots to fall to the 102nd was Krefeld, a key railroad and communications center. At this city the Division stored its supplies in caves that the Romans had used centuries before as barracks, and, when taken by the Yanks, were the site of a tremendous rocket factory.

The Ozarks chased the Gennans from the Rhine to the Elbe, and, on reaching the Elbe north of Magdeburg, did extensive patrol duty while awaiting the arrival of the Russians. On May 4, the German Ninth and Eleventh Armies surrendered to the 102nd at Worgl. The Division was at this town on V-E Day.

There are 37 soldiers of the 102nd Infantry Division World War II still listed as missing in action. 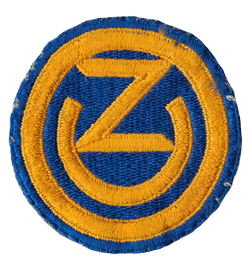